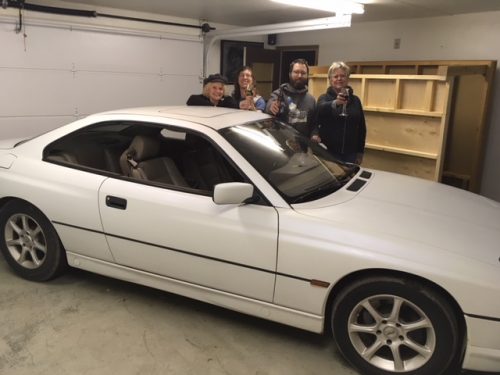 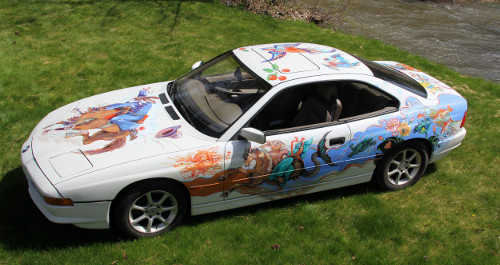 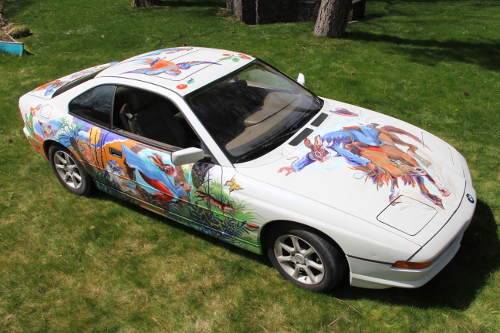 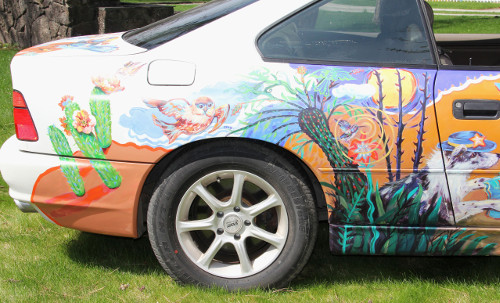 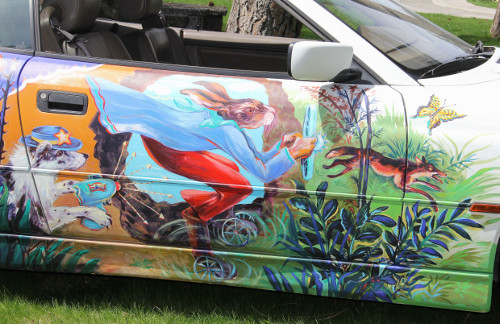 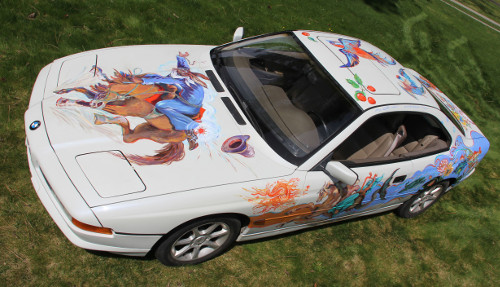 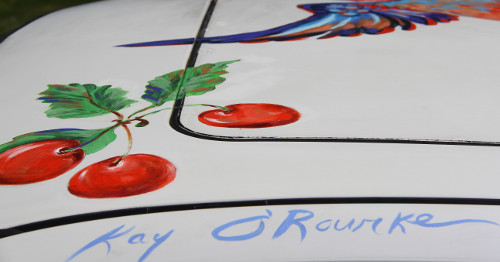 A part of our 2018 event is a special feature art car. We have partnered with the Spokane Art Community, local artist Kay O’Rourke, and Bring a Trailer to transform a BMW 840 into a beautiful work of art that a lucky bidder will get to drive away in and own as a unique masterpiece.

Kay O’Rourke is a well-know and accomplished artist living right here in Spokane. Kay is known to tell stories in her works of art, some of which are currently on display at the Art Spirit Gallery in Couer d’Alene, Idaho and in the past have been shown at the MAC (Spokane ‘s Museum of Arts and Culture), and over 50 exhibitions in the Northwest and throughout the U.S. She’s won “best of show” and other awards, including a local magazine’s “best local artist” award, voted on by residents.

The art car intricately details a story about a driver named Joe and a car named Jessie. The most unique canvas that will not only please the new owner each time he or she gets behind the wheel, but also those who get a glimpse of the car on the road.

The car will be unveiled prior to the Spokane Festival of Speed event and the Bring a Trailer auction for bidding will open on June 1.

The Journey of Jessie and Joe

Joe was a jack rabbit who had an addiction to speed and high powered excitement. Down in the old west his version of horsepower was a wild stallion that bucked more than he ran. Into Joe’s life came a white steak of a sports car, a BMW that ran fast rather than bucked high.

Jessie was her name and speed was her game. She told Joe that together they would make racing history. In old racing it was the high speed “rabbit” who was sent out ahead of the race pack to wear down and break contenders so his partner could then slingshot ahead to the finish line!

Joe now had new wheels and he and Jessie roared north. They were drifting and sliding and even did a little under steering and over steering when cows (steers) crossed the highway. A dogged state patrol man stopped him on an isolated stretch of straight highway. Joe was going the speed limit (right then!) and the patrol man turned out to be a car admirer and just wanted a closer look at Jessie’s sleek profile.

Birds and cactus flew by as the demons of speed possessed both car and driver. There was no yellow caution flag or steward to slow them down! Jessie was candy for the eye as she heeled and toed down the highway. Their only stop was for a banana splitter that then sent them on their way again.

Over river, over dale beside the sea and beyond they sped. Golden fish flashed by, lily pads quivered and turtles weren’t going to beat this rabbit to the finish line! Jessie’s horse power was like a mythical steed that sped through the waves of life and Joe pictured himself upon it! As they raced toward the setting sun in the west, the speed demons now guided their way.

Jessie and Joe arrived in the northwest just in time to attend the Spokane Festival of Speed. Their speeding journey had been imprinted on Jessie’s sleek surface and she became the cherry of every race lover’s eye. Joe was so proud of Jessie, a 130 MPH reflection of fine art!